+++ stu trips is a series highlighting artists in their studios or creative spaces. the idea is to stop by and have a meaningful conversation with the artist on their terms in their world. if you are an interested artist or know of someone who may be, email hotelscallops@gmail.com to schedule a visit. **** 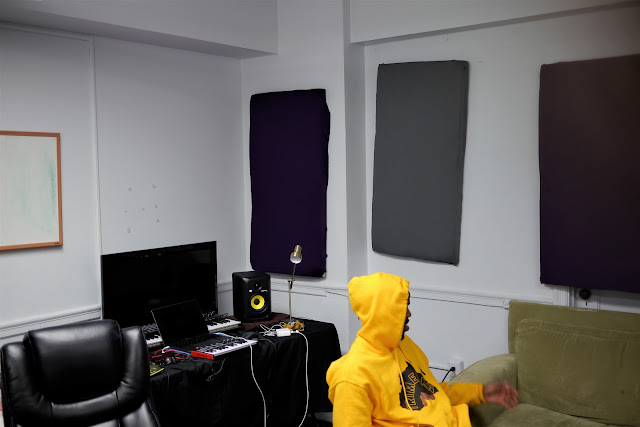 wazo daveed is a 20 year old artist based out of portland,me. he's an upstart with tremendous vision and unshakeable faith in himself, his crew and their work. i was blessed to rock a set at wazofest a multi-day, multi-stage, multi-venue interdisciplinary art/music/fashion festival daveed and his crew, kesho wazo, hosted. what struck me most about the event was their guiding ambition to be the first to put on for diasporic Black youth culture from maine.


in the course of this studio visit i learned daveed is eager to leave maine, though we both are in agreement this state and others like it represent a last frontier in many senses. especially from a Black POV, there's a tremendous abundance of resources natural and other here. however the lack of a cohesive Black community, Black representation and understanding of Black people can be difficult to live with on the day to day. 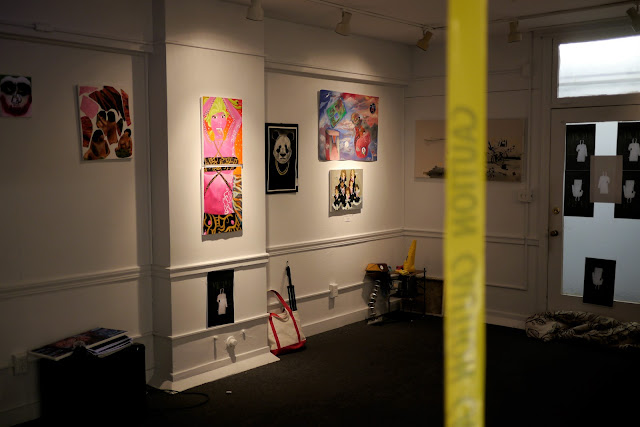 and while that is changing, the rate seems wild slow. one may be tempted to ask "well why stay there?" however our history here is immense. the 3rd oldest freestanding structure built by free Black americans is in portland and to echo across time from that place, to walk streets that were in many instances the last stop on the underground railroad for people, learning of historical Black seafarers who chose to stay in maine and make permanent homes to reading of malaga island and the established history of Black alternate communities in maine dating back centuries makes one itch for the possibility today. i want a stake of what is natural and beautiful and clean and untouched by the modern western ultracapitalist. maine still contains pieces like that. for now. 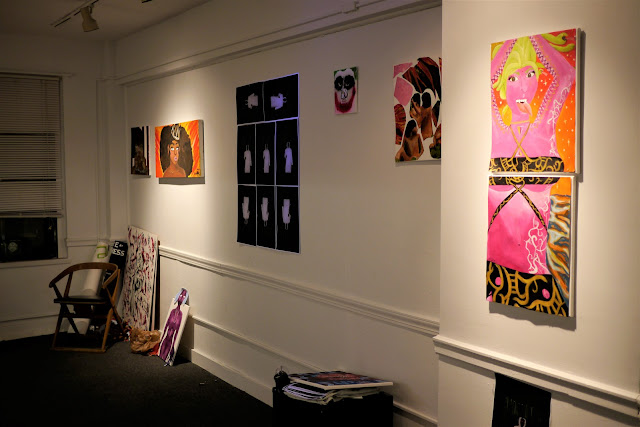 but anyway, this state is incredibly small, a million and a little change for a populace spread out over massive area and of that small populace is an even tinier Black diaspora which is itself incredibly rich and diverse. for years maine has been a destination point for African immigrants, refugees and asylum seekers of many countries. what impresses me about daveed and his work is the fluid synthesis he achieves. born in Kinshasa, Congo, growing and becoming in portland, daveed told me stories of high school infamy and ambitions unmatched. from his studio in portland we talked for two hours, below are the bits we at soulfolks thinktank found acceptable to share. thankyou and big love to wazo daveed, kesho wazo, portland maine, the Abyssinian meetinghouse, SPACE, biddeford maine, and you the reader on the toilet. shaloom and bless you. wash ya hands ya filthy animal. 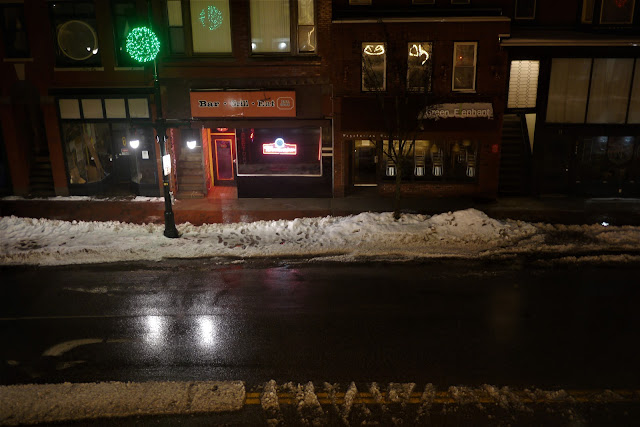 SF: How did Kesho Wazo come to be the go-to for young Black artists in Portland?

WD: I started before young niggas could do this. 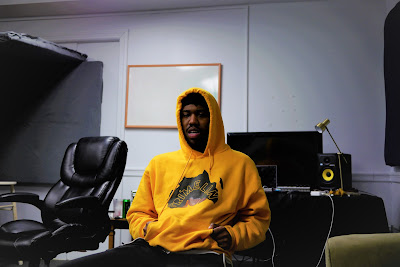 SF: What age was that, would you say?

WD: It was like 17.... I was 17 and Lil Uzi just popped, Lil Yachty just popped and Playboi Carti just popped... and they had this movement with the merchandising and stuff...

SF: Would you say they inspired you a lot?

WD: Na— they didn’t even inspire me, just their movement from the merch to whatever, not a lot of young niggas was hip that we can *do this*. Everywhere else people do this, but not in Maine...

SF: I didn’t realize you were so young. You have a 2 room art studio in downtown Portland at 20 years old. You know you sort of on some Black Ferris Bueller shit.

WD: I feel crazy bro. It’s so much. I’ve learned so much, I’ve made a lot of mistakes man. I used to have a crew of 20 people... now it’s small. I’ve made so many mistakes... being an artist is lonely...
I thought my lease was up end of May but it’s end of April. I’m going back to school. These white people, yo, I want to build a university. They will kill you out here! You got to be smart. I went to MECA, I was a hothead there, thought I was the illest there.... I was geekin’ and I couldn’t go back this semester. The money got fucked up. And they racist over there— well not racist but

SF: They don’t know how to be around Black folk.

WD: Yea! They don’t know how to be around Black kids.

SF: That’s a problem I get a lot out here.

WD: That’s why I be doing this. You know how many opportunities art has opened up for me? So many doors. White people respect this, some of em want to work for me.

SF: Art is the equalizer.

WD: You have to figure your finesse and go. Like why I called my album Identity, things were crazy. I really had to dig deep within myself and figure out what everything means and why I’m doing this. That’s why I want to go back to school. How do you help everyone, on a global scale, without that [degree]? 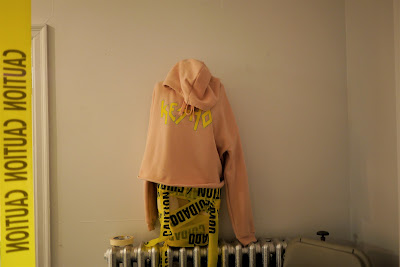 WD: You dropped out?

WD: Na but what year in school were you?

SF: I had just finished my junior year.

SF: As you said, we young business owners. I own a few LLCs, multiple streams of income. My kid got a savings account. It’s all good. I want to attack the institutions that honor that shit. When you hear me rap, you swear to God I went to college, you assume I have that degree. But na, I’m not. I’m just like you. I’m a quitter. Someone who got overwhelmed and never went back. And that’s cool. That’s part of being an artist— this indoctrination while important, I don’t know... I got to retain my mind! My soul!

WD: So many times... that battle of giving into their system. We could create our own system but how many niggas will believe that?

SF: How many homies I got see this happen but won’t make the leap? That day job security.. some folk cannot fathom living without it. But by 20 I had nothing like this, your studio space, your collective, your catalog, you should really be proud of yourself. This is terrific. And not this space simply but what it represents. Y’all did a festival? shows? gallery exhibits? thrift store takeovers? Be very proud. 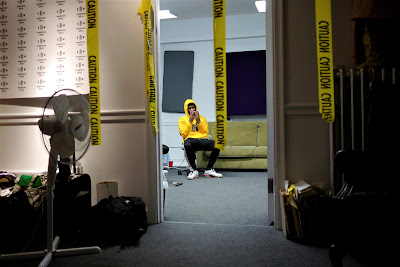 SF: You ever sit in here and meditate?

WD: Na I be stressed.

SF: But in here is your world! The autonomy that comes with these walls relative to even MECA walls.

WD: I feel way more free. Sometimes I take a painting down and move it. I hate how museums don’t let you touch the art. In here I might jus touch it. Those rules stop the creativity. In here there are none.

SF: Autonomy is everything.

WD: It’s also scary! A lot of pressure, rent will wake you up. 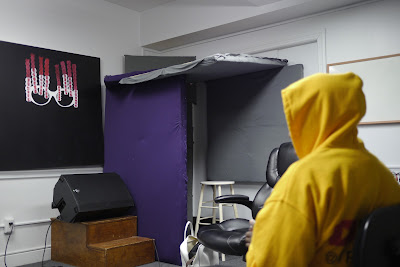 WD: There’s life too! That’s what I’m remembering... like when someone records in here for the first time and makes a lit ass song. I’m like, “DAMN!” I feel it then. When they about to put it out, this shit is way bigger than me, this is a gateway. More so than not, when losing the fun, you get caught up doing this and that.

SF: My studio is a fucked up mess... I can’t be judged... as you said, no rules. This is very tidy comparatively speaking.

WD: You got to come to Portland more! You be far widdit!

WD: You know what’s crazy? I got caught smoking weed and I was sent to Biddeford for a whole summer. My aunt used to live over there in the cut... in the fake projects with the low income housing. Biddeford is like...

SF: But it’s a small ass town too and there are Black people out there and we are making it happen. And I love the feeling of the town. Portland is refined... too elitist. 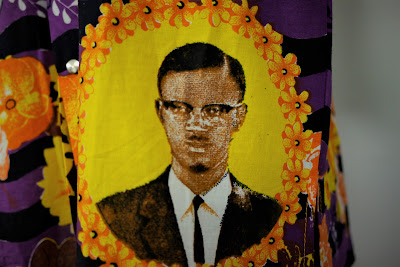 SF: Where you going?

WD: It’s a dub bro. I’m not around people like me here. Niggas make me lazy, spiteful, chill. That’s why I be around old people, why I be at SPACE. There’s another level to this, another echelon that cats here have not seen. If you gathered 100 youth from every culture the only thing they’d have in common is they all fuck with hip hop. Niggas need a new platform to say “I’m an owner”.

SF: And there’s something to that, right? Something that has affected the vision... but it is time to leave.

WD: How did you transition from the college dorm to what you have now?

SF: I went from dorm to campus house to drop out. I was working on rap. My boy I lived with was a hustler, shout out Nedarb Nagrom. We booked a 30 day tour and did it in my other homie, shout out Riley Lake, they momma’s Prius. When we got back I had a thousand dollars to my name. That was enough for me, I could live off that. So I made the call. And continued to jus rap my ass off. I really pop up at shows like we gon cipher? Cats ask what year it is, I do not care. That’s how I earned my name, my stripes. Jus rapping my ass off.

SF: Maybe for fun but na I never did

SF: How we gon get free?

WD: Iight. First of all, next year will be the craziest ever. They playing with our minds now... but niggas know there’s a way out. Have you seen what happened with XXX? and Black people? We think this is a game. But the next President is going to be like Kim Kardashian. How we going to get free? There’s not going to be hospitals or schools. We going to go back to the ghetto. Free in a sense... away from the system. The whole thing won’t crumble but ... melanin is going to unite. Real spirits will arise. I feel like that’s what is going to happen. Everything is downloaded, the world is spinning, this shit vibrates. Right now. Black culture is unlearning everything. We’re becoming innocent again, our baby selves, our true selves. Niggas going back to natural birth and not working for white folk, we going to have our own currency. The average white person is stuck on Trump. Niggas like us— know how to get money. My cousins? They will be billionaires. In 10 years it will break down cos niggas have broke the code.

WD: Exactly. We gon get free like that. Kids in 2nd grade know everything, they up to speed, technology has accelerated their development. 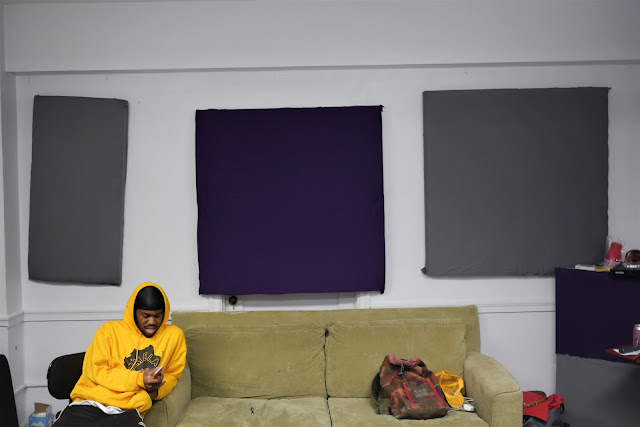 at March 19, 2019
Email ThisBlogThis!Share to TwitterShare to FacebookShare to Pinterest